Campaign: ‘Who is Muhammad?’ 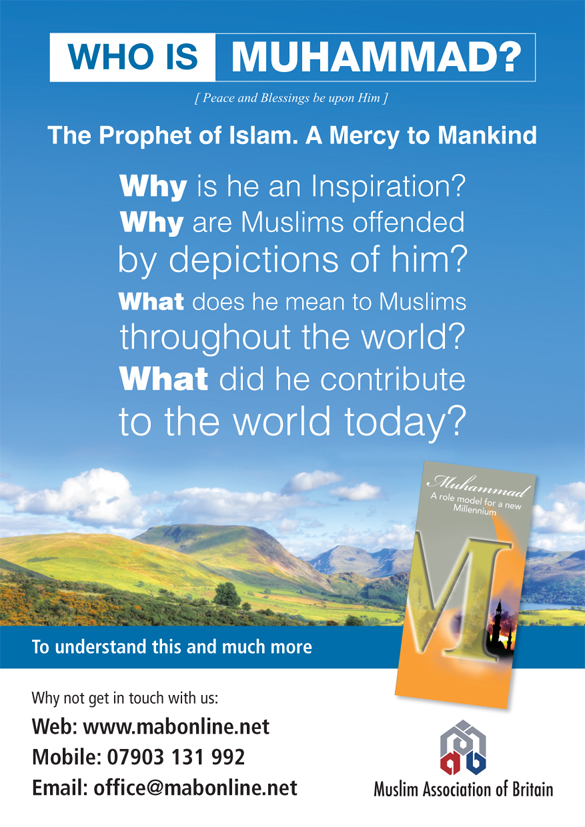 ‘Who is Muhammad?’ is a campaign organised by the Muslim Association of Britain. It sets out to inform the British society about why Muslims all over the world find inspiration in Prophet Muhammad and discusses any misconceptions about him (May Blessings and Peace be Upon Him).

For this project, we have made a special flyer to be distributed in many parts of the UK. Here is how it looks:

MAB is also planning other events for this campaign, such as advertisements on billboards, buses and finally arranging a big conference addressing the same question of ‘Who is Muhammad?’. We aim to attract people of different backgrounds and so invite all who are interested to join us – whether that is in the planning and organising stage or partaking in the upcoming events.

Currently, some dedicated volunteers have lined up to support this campaign, providing us with their contact details.

This coming period will be interesting to see a tolerant society in action – how people respectfully choose to interact, ask questions and use informed opinions with each other about different historical, religious and other contexts for understanding the Prophet Muhammad – revered by many Muslims in the world, including the UK.

If you would like to know more or help us in our campaign of ‘Who is Muhammad?’, please contact us on:

MAB also welcomes donations, even small ones that we would be grateful for as it will help us in improving the campaign and continue to send our message.

Muhammad (peace be upon him) was born 570CE. By the age of 40 he had set about spreading the message of Islam. By the time of his death in 633CE, Islam had spread dramatically. Such has been the impact of his (pbuh) achievements, his character and leadership that he has been praised by Muslims and non-Muslims alike. To so many he is considered to be THE GREATEST PERSON WHO EVER LIVED.