Diverse and Strong Voices Emerging – 15,000 Stood Up to Racism and Fascism in the UK

Diverse and Strong Voices Emerging – 15,000 Stood Up to Racism and Fascism in the UK

On Saturday 21st March in London, thousands of demonstrators joined hand-in-hand and firmly said “No!” to any form of racism: Islamophobia, Anti-Semitism, Fascism, etc.

An estimated 15,000 people (compared to last year’s 10,000) demonstrated and was fully dedicated in voicing their unprecedented solidarity with speakers from different organisations. All speakers advocated for the end of a cultural and institutionalised racism which is sometimes manifested in politics, education and other fields of society.
The assemble point was the BBC’s Portland Place and the march headed towards Trafalgar Square. Here many pictures where taken of demonstrators rejecting racism and fascism, each in their unique way. Stand Up For Racism Facebook has published a few here.
The crowds expressed hope for a better future, but also distress at the unfortunately growing intolerance in multicultural Europe and the UK. In the aftermath of the Charlie Hebdo attack, it has on several occasions been documented that mosques and Muslims have been attacked in public. Recently, a pregnant woman was kicked several times for wearing the headscarf and consequently suffered a miscarriage. In Germany, the racist Pediga movement has organised large demonstrations to oppose the presence of Islam and been openly Islamophobic. [Although, only four attended an Edinburgh protest]  It has also been worrying how certain political views have been expressed prior to the UK General Election. While current Government has introduced the new Counter Terrorism and Security Bill (CTSB) to deal with ‘Islamist extremist’, UKIP leader Nigel Farage seems to have clearly been the ‘winner’ in a bigoted competition in fear-mongering people about an ‘uncontrollable mass immigration’ to Britain; and labeling Muslims as a “Fifth Column”.
The demonstration has showed that the language of tolerance, respect and love for others triumph racism and ignorance found in minority groups. It sent a universal message of the necessity to celebrate diversity and rejecting one of the biggest diseases in human history – racism.
The demonstration was attended by a number of organisations including Stop the War Coalition, the Palestinian Solidarity Campaign, MEND, the Muslim Association of Britain and others. 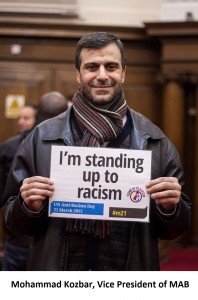 The President of MAB, Dr Omer El-Hamdoon, delivered a powerful speech where he stated, “We live in a time where it is becoming more acceptable to stereotype and demonise those some perceive as the ‘others’. It is tragic we are drowning in a binary rhetoric of ‘us’ versus ‘them’ when most of us knows that reality is not absolute and there is more than one story to be told, especially in the media.” He then continued, “Such simplistic perceptions of reality deny understanding the diversity of people and their experiences in life as human beings. So, instead of feeling valued, people start to feel isolated and lose that important feeling of belonging in society. They begin to lose hope and when hope is lost, some get a ‘victim-sort-of mentality’ that, unless we educate ourselves and spread awareness about the danger of racism and fascism, will cause harm for generations to come.”