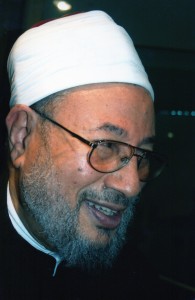 Famed for his informative and forthright performance on Al-Jazeera television channel, al-Qaradawi has become a household name throughout the Middle East and increasingly well known throughout the world. Few scholars can claim to have the gravitas or the deeply grounded knowledge about core principles of Islamic legal jurisprudence, or better understand the fundamentals and the deeply nuanced narratives of the Quran or the tradition of the Prophet (may upon whom be peace).

To many, al-Qaradawi is Islam’s Pope. His religious decrees are enormously influential and his strong unwavering stance against Zionism is canonised by followers who hang on his every word. Ironically, this quality earned through years of study and activism is also his greatest weakness. Such influence in the Muslim world has inevitably galvanized his opponents to explore as many available avenues as possible to silence him.

al-Qaradawi is therefore persona non-grata in a number of Western countries. Entry bans in the US and the UK mean that his teachings are confined to the Middle East, but the resonance of his religious edits permeate the walls, corridors and palaces of Arabian royalty, as well as the surveillance of intelligence apparatus and Middle Eastern commentators who pay close attention to his maverick non-conformist, but nevertheless, popular views. His unapologetic sanction of suicide bombing in Israel (solely for the defenseless Palestinians) is perhaps his most controversial of his religious judgments – one that has placed him in the spotlight and guaranteed him almost perpetual hostility to Israel and its supporters.

Since the outbreak of the Arab Spring, al-Qaradawi has been a consistent advocate of reform. He consistently supported the revolutionary fervor of demonstrations in Tunisia, Libya, Yemen and Syria but it was the events in Egypt that promoted him to travel to Tahrir Square and address a jubilant crowd. Speaking to and about the protestors he said; “They triumphed over robbery and they triumphed over plundering. They triumphed over egoism, and they initiated a new life by this revolution. The first whom I will congratulate are these youth, some of whom thought that they would not triumph.”

However it was at the fall of the government led by Dr Mohammad Morsi, the first freely elected President of Egypt, that al-Qaradawi issued his most critical fatwa: “It is haram for Egypt to do this…Nothing can come after this except divine wrath and punishment.” He issued another fatwa calling on Muslims from around the world to rally in support of the Egyptians. “Allah will ask you on the day of judgment whether you saw these human massacres,” he declared.

Unable to stem the tide of criticism throughout the world about the counter-revolutionary events in Egypt, the former Egyptian defense secretary who staged the coup, placing Morsi on house arrest a day before the demonstrations, vowed when elected President, to wipe out his opponents.

Faced with the embarrassment of leaked recordings (which involved the highest-ranking military rulers in Egypt, including the coup leader) conspiring together, falsifying evidence, forging documents and admitting to criminal behaviour on tape, while acknowledging that the legal case concocted against Morsi was in danger of collapsing; it appears that the Egyptian authorities has moved to minimize the damage.

The extradition of the 88-year Sheikh would be a political victory for Egypt’s rulers but it remains to be seen whether Qatar will be persuaded to hand over the Sheikh to face trial.