MAB condemns the killing of 3 Muslims in North Carolina 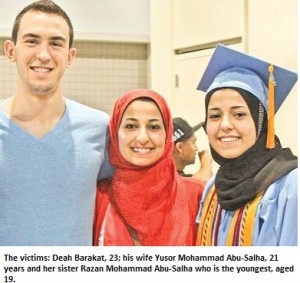 On Tuesday the 10th of February, a man by the name of Craig Stephen Hicks turned himself in to the police for the killing of 3 Muslims and has since been charged with three counts of first-degree murder. According to latest news, investigators are still looking for the motive of the heinous crime which some believe was a dispute over parking space between the young victims and their neighbour, Hicks.

The Muslim Association of Britain expresses its strong condemnation of the shooting and consequent killing of the three Muslims in Chapel Hill, North Carolina.

MAB offers its condolences to the family of the victims.

MAB encourages people to use the hashtag #MuslimLivesMatter to raise voices together for these young victims who tragically lost their lives to what seems to be hate-motivated murders. It is important that American Muslims feel safe living in the US as well as other Muslims in Muslim-minority countries.   Dr Omer El-Hamdoon, President of MAB said: “This horrific attack is a terrifying reminder to us all of the increase in Islamophobia and that more should be done to combat it.”He added, “Our thoughts are with the families of the victims and we pray that Allah, the most Merciful, showers the victims and their families with His mercy

MAB is playing a big role in the English society, politically and socially. MAB is a voice for many British Muslims. It was one of the organisations who got 2 million people onto the streets in London to protest against the Iraq war. MAB also worked hard to make the Finsbury park mosque to be a community centre and it is now a role model to many mosques in the country. MAB helped young men and women to be a part of the society and getting leadership role in youths activities such as REVIVE programme. MAB is playing a critical role in general for British Muslims and helping them to be role models for a good British Muslim.