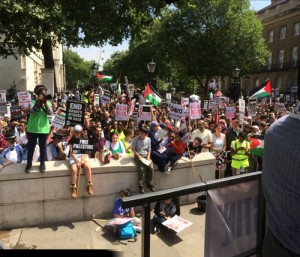 Demonstrators have held one of the biggest protests ever staged in London in support of Palestine and in condemnation of the Israeli military aggression against Gaza.

Some estimates put the crowd close to 100,000 people and in an unprecedented show of solidarity, speakers from different organisations appealed for the immediate end to the hostilities.

The demonstrators began the march outside 10 Downing Street and proceeded on to the Israeli Embassy.  Kensington High Street was completely closed off in order to accommodate the huge numbers of people.

The crowds expressed anger and dismay at the aggression against the Palestinian people, which has lasted almost two weeks and has resulted in the deaths of over 350 Palestinians, most of which have been women and children.

The violence has led to an international outcry condemning the deliberate targeting of civilians and there have been harsh criticisms of Israeli bombing of hospitals – a clear violation of international law.

The march was staged by a number of organisations including the Muslim Association of Britain, Stop the War Coalition, the Palestinian Solidarity Campaign and others.

MAB president, Dr. Omer El Hamdoon expressed his delight at the massive turn out of support, “This has been an historic occasion. What we have witnessed is that categorical rejection of the British people of the aggression against the citizens of Gaza.”

He continued, “There can be absolutely no justification for the killing of innocent women and children or for the targeting of civilians or for the devastation to the lives and property of the Palestinians. It is abundantly clear that the British government and the international community must act swiftly to put an end to this violence and the end the causes of this aggression so it never happens again.”

MAB protects the interest of Muslims and fights for our rights. MAB fights for equality and justice, not only for Muslims in UK, but also stands up for our brothers and sisters in other parts of the world.