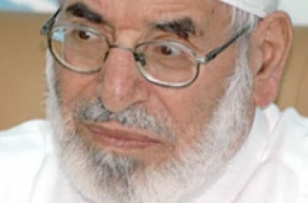 Another star eclipsed: the death of Sheikh and thinker: Dr Munir Al-Ghadbaan

On the third of Sha’baan 1435AH, the Muslim World lost another great among the greats. Sheikh Munir Al-Ghadbaan died at an age of 72.

Sheikh Munir was truly an inspirational figure. He lived his life for Allah, by devoting his youth and time for serving Allah and His creation. He contributed in many ways, through leading Muslim groups to partaking in academia.

He was born in Damascus, Syria in 1942. At the age of 25, he completed his license in Shariah from the University of Damascus. He went on to specialise in the Arabic Language and Literature, attaining a Masters followed by a PhD.

A true academic and writer, he was famous for his book: The movement methodology of the Prophetic biography. In addition to that: Fiqh of Al-Seerah, a book which was made part of the reading list in Umul Qura University amongst others. In the year 2000, he attained the Sultan of Brunei’s award for service to the Prophetic Biography.

He also compiled a number of books in biographies of the Prophet’s – salla Allahu alaihi wa sallam – companions; reminding us of their virtues and actions, which made them the unique generation.

Dr Al-Ghadbaan was also a thinker. He wrote about the different movements in the Arab World, in addition to revivalist writings. One such book was titled: My thoughts by which I live for. Moreover, if one looks at his works (published and unpublished) one would see that he wrote in a spectrum of topics.

Those who knew him said, “Indeed he was Munir (illuminated); yet he wasn’t at all Ghadbaan (angry), for he was continually smiling, alert in his remarks and liked to bring joy [to others].”

Sheikh Munir was an active scholar, who believed that Islam is the way of life that a Muslim should live by. With this belief, he joined the Muslim Brotherhood; and went on to become the head of the MB in Syria during the 80s.

No doubt with his death, we should feel saddened as another beacon of knowledge is raised from this Earth. As the Prophet salla Allahu alaihi wa sallam said:

“Allah does not extract knowledge by forcefully snapping it away from people; rather by the death of scholars.”. (Bukhari and Muslim)

And with the death of these scholars one by one, knowledge is gradually being lifted away from people. This deserves to be recognized by the owner of an alive heart.

The death of a scholar is a loss to the world, as Ali bin Abi Talib – may Allah be pleased with said: “If a scholar dies in the world a wound is inflicted into Islam, something not plugged until the Day of Resurrection.” Narrated by al-Khatib al-Baghdadi and Ibn Abd al-Barr .

The death of Dr Al-Ghadbaan comes not far off from the death of his companions Dr Abdul Kareem Zaidan (Iraq) and Sheikh Muhammad Qutb (Egypt), who are all truly missed.

May Allah have mercy on Sheikh Munir and raise his status among the righteous, in the highest of gardens.