During some of the most difficult and tumultuous periods of his mission, the Prophet (pbuh) resorted to prayer as an inexhaustible source of tranquility, spiritual relief and fortitude. Prayer is the first and foremost source of human empowerment.

This was clearly demonstrated on many occasions during his time in Makkah, where he endured the continuous hostility of Quraysh while preaching the message of Allah. Prayers kept him focused on the task of moral action and steadfast on self-exertion in the cause of Allah. The task was arduous in every sense and it therefore required regular contact with the Creator, drawing on His benevolent mercy and assurance. The person praying is honoured with the privilege of approaching the Divine presence and engaging in gracious and intimate converse with his Creator.

At that early stage of Islam, the Prophet (pbuh) was commanded to spend regular time praying in night vigils: “O you who wraps himself [in clothing], arise [to pray] the night, but not all night – half of it or a little less. Or add to it, and recite the Qur’an with measured recitation” [Qur’an 73:1-4].

This was an instruction for intensified contemplation that would strengthen a discerning soul. When one is engaged in prayers and recitation of the Qur’an, the person is reminded about the realities of life, its fragility, and its relative insignificance despite all its pageantry and vanity; a reality that is most striking when we visit a graveyard. Humans then seek solace and serenity in the remembrance of Allah and His graceful proximity. The remembrance of Allah inspires spiritual comfort, as the Qur’an describes: 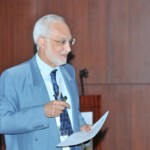 *Dr Basil Mustafa has been an active  member within British Muslim organisations for over four decades. He was a former deputy secretary general of the MCB, a founding President of the Islamic Society of Britain, and has had a longstanding association with FOSIS and MSS. As an educationalist, Dr Mustafa has published numerous chapters and articles on varied Islamic Studies themes internationally. He is based in Oxford, UK.