The Muslim Council of Britain: #VisitMyMosque

Over 150 mosques across Britain opened their doors today for the third annual Visit My Mosque Day. With dozens if not hundreds reported to have attended each mosque, this could well be one of the largest attended open mosque days in the world.

#VisitMyMosque day, facilitated by the Muslim Council of Britain (MCB), provides a platform for Muslims to reach out to fellow Britons and explain their faith and community beyond the headlines.

“We hope that Visit My Mosque Day will become a great British institution. So many British Muslims opened the doors to their mosques and their hearts to thousands of fellow Britons keen to reach out to local Muslims and find out about their faith. We were also moved by the record numbers who came in solidarity to Muslims and the hostile atmosphere they find themselves in.”

“Now more than ever, we need initiatives like #VisitMyMosque as antidotes to the poisonous atmosphere of fear and distrust rippling through society in the wake of recent events.”

Speaking at the launch event at Finsbury Park Mosque, Jeremy Corbyn spoke about how bad rhetoric results in acts of hate, and the importance of endorsing values of respect to bring communities together. With a particular note to Donald Trump, he said:

“Drinking tea together is far more effective than pouring concrete to build walls”.

This year the Muslim Council of Britain showcased a number of mosques who helped their local communities through social action projects.

The full list of mosques that took part today can be found online at  www.visitmymosque.org/find

A small number of mosques will be holding their open days this coming weekend 11th and 12th February for logistical reasons.

Notes to Editors:
1. The Muslim Council of Britain is the UK’s largest Muslim umbrella body with over 500 affiliated national, 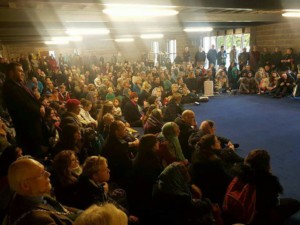 2. #VisitMyMosque day is a national initiative where over 150 mosques across the UK are holding open days to welcome in their neighbours from all faiths and none. It is facilitated by the Muslim Council of Britain, the country’s largest umbrella body of mosques and Islamic associations.

3. Participating mosques on 5th February 2017 are listed at www.visitmymosque.org

4. The list of participating mosques represents the diversity in Islamic traditions, with mosques from a wide variety of Islamic schools of thought and traditions taking part, including some of the country’s largest mosques seasoned in doing outreach activities, as well as smaller mosques holding open days for the first time.

5. A mosque is a place of worship for those practicing the Islamic faith, where five daily congregational prayers are held, led by an imam (prayer leader) and serve as community hubs offering a range of activities and facilities. One of the oldest mosque’s in Britain was established in 1887.

6. In the run-up to ‘Visit My Mosque’ Day 2017, a number of mosques participated and have helped to organise interfaith exchanges and visits, ranging from observing church services to peace walks to interfaith conferences. Further information here: www.mcb.org.uk/interfaith-visits-spread-in-run-up-to-visitmymosque-day/