Report on British Muslims in Numbers

This report ‘British Muslims in Numbers’ have been produced by the Muslim Council of Britain. It is is a frank snapshot of the state of British Muslim life based on numbers taken from the 2011 Census. 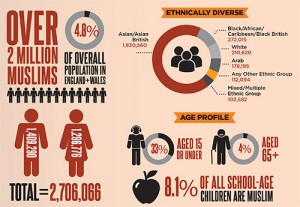 It is the first detailed study of the characteristics of the Muslim population emerging from the 2011 Census. It is the only comprehensive report looking at Muslims from a data perspective prepared from within Muslim civil society.