The Future for Muslims in Britain Review

The Future for Muslims in Britain Review

On 11th March, Professor Tariq Ramadan, a prominent intellectual and Professor in Contemporary Islamic studies at Oxford University, and Dr Anas Altikriti, the Chairman of the Muslim Association of Britain and CEO of the Cordoba Foundation, came together in a panel discussion urging Muslims to embrace their British identity, reconcile their differences and contribute positively to the wider spheres of societal life.

In an event organised and hosted by the Muslim Association of Britain, both speakers addressed a diverse audience of over 250 British Muslims from varying ages, professional backgrounds and religiosity. Discussion for the evening centred upon ‘The Future for Muslims in Britain’, a topic that proved not only stimulating but very much needed for the enthusiastic and interactive attendees. 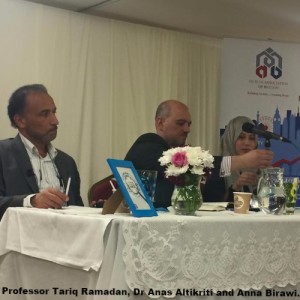 Taking a predominantly conceptual direction, Ramadan focused on several aspects essential to the success and survival of Muslims in Europe, as well as Britain. He began by urging Muslims to “feel like you belong to the country”, emphasising the importance of adopting a British Muslim identity. In order to challenge and remain strong in the face of Islamophobia and systematic discrimination, Ramadan emphasised the need to know oneself and know ones religion for the benefit of Muslims and British society as a whole. Emphasising the importance of understanding the meaning behind Islamic rulings he claimed, “The only strong Muslims, spiritually speaking and intellectually speaking, are the ones who understand what is it all about. It’s about understanding the rules”.

He continued by highlighting the pressing need for Muslims to unite. Drawing on the words of the Algerian writer and philosopher, Malik bin Nabi, who once said  “We were colonised because we were colonisable,” Ramadan claimed that “Muslims are divided because they are divisible”. Challenging the closed practices of many Muslims, he called for intra community dialogue as a vital way to empower Muslims in Britain. “Unity is managing diversity”, he proclaimed.

In response to fears of assimilation expressed by one member of the audience, Ramadan reiterated the need for Muslims to reconcile their beliefs with the context and society they are living in, without diluting Islam or failing to act. “We need to prioritise. Don’t let the small details justify your pacifism in society”, he urged. It is a priority for the future of Muslims in Britain to enact change.

Taking a slightly more practical approach, Altikriti emphasised the need to contextualise, engage and activate. “Nothing comes in isolation. Everything has a context, belongs and connects,” he stated. Drawing upon the examples of terrorism, economics, crime and politics, he urged Muslims to adopt these problems as a collective problem affecting all. “We are part and parcel of Britain, it’s society and it’s people…this is my language, my society my people”, he asserted.

Muslims should actively engage in wider spheres of politics, economics, law and education if they hope to influence the society in which they live. Altikriti identified this as an obligation, rather than a choice. “We have an obligation to assert our values as values of any human society; to live in peace, prosperity, stability and security.”

Altikriti ended his talk with a powerful message calling for Muslim action and participation, “If we don’t speak out against the political, social and economic injustices that are happening in our society we will not be doing justice to our name (as Muslims) or our values”.

A full recording of the event is available HERE.


The Muslim Association of Britain have plans to organise a follow up event facilitating practical workshops that will enable British Muslims to put the advice of both Professor Tariq Ramadan and Dr Anas Altikriti into action.