The Tale of a Deleted App Ramadan is upon us. For most of us, it is defined as the month of fasting. Yet, in the one time, it is mentioned in divine revelation Allah chose to define it by the Holy Quran:’ The month of Ramadhan [is that] in which was revealed the Qur’an’ (Al Baqara 185) whilst complementing this with the month’s ultimate aim being ‘so that you may be God-fearing’ – ‘لعلكم تتقون’ (Al Baqara 183)

Taqwa is one of many adjectives used in the Quran to describe those who believe. In addition to saying please and thank you, Muslims are expected to abide by certain mannerisms and morals. In Surat AlTawba, verse 112 Allah says: “[Such believers are] the repentant, the worshippers, the praisers [of Allah ], the travellers [for His cause], those who bow and prostrate [in prayer], those who enjoin what is right and forbid what is wrong, and those who observe the limits [set by] Allah”

It is through the process of ‘Tazkiyah’ (purification of the soul) that a believer can come to be defined by these characteristics. As Imam Ibn Kathir explains, “Tazkiyatul-Nafs” is cleansing the soul from its evil characteristics and moral dirt and wastes, reducing its bad habits, and developing good habits and characters.” He outlined two steps to the process that can be summarised as firstly clearance, followed by beautification (التخلية قبل التحلية). By first emptying the soul from Dunya and vice, an expanse is created for virtue.

The most dramatic manifestation of this process happened over 1400 years ago. Shortly before he received the revelation for the first time, solitude was made beloved to Prophet Muhammed (PBUH). Alone and stationed high up in the Cave of Hira, he was able to remove the blemishes that, through the continual exposure to dunya, had become attached to the heart and soul. He (PBUH) was in a state of clarity ready to receive that ‘Weight Word’ قولاً ثقيلاً (Al Muzzammil 5) at that magnanimous moment of Laylatul Qadr; a moment that transformed the soul-searching Muhammed ibn Abdillah into the Prophet of Allah sent for the guidance of mankind. 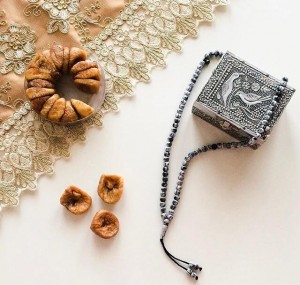 Ramadan is a month-long simulation of that moment. Fasting clears space for Quranic guidance to penetrate the heart and elevate the soul. Abstention from food, drink and marital relations is only the physical dimension. Mujahid and Ibn Abbas described the spiritual dimension as that of Prophet Muhammed’s unwavering attention while Jibreel (عليه السلام ) held him in a tight, almost crushing, embrace to reveal those first Ayat. They explained that for a soul to heed the Words of Allah, a state should be reached where a Muslim doesn’t even catch himself thinking of anything but the Quran (لا يحدث نفسه بغير القرآن). This requires the dedication of both time and attention.

Time and attention. The two prized possessions, now considered a finite currency hounded by every company in the online world, must be reclaimed and redirected. In an event in 2017, Sean Parker, a founding member of Facebook and it’s first president said ‘how do we consume as much of your time and conscious attention as possible?’ and thus the feature of ‘infinite scroll’ was conceived. Netflix creator Reed Hastings has said multiple times that the company’s biggest competitor isn’t another website – it’s sleep! This is catastrophic prior to even examining the moral corruption and anti-Islamic values these platforms broadcast.

In light of this, while devising and executing our tazkiyah plans this Ramadan, there ought to be as much consideration given to what will be restricted as to what will be amplified. As cliché as a social media detox sounds, it is key to a well rounded spiritual detox. At a time when physically shielding from coronavirus is paramount, it is important to also shield from content that ranges from time-wasting to spiritually-destructive. With an emphasis on graduation, I urge you to defy the odds and your nafs by protecting your valuables; your time and your attention. Then sit back, relax and let Quran soak deep into your very being. ‘O mankind, there has to come to you instruction from your Lord and a healing for the ailments of the hearts and a guidance and mercy for those who believe’ (Yunus 57).

Nahla El Eraky, a doctor by day, an Iraqi by name, an Egyptian by nationality.

MAB has become a platform where strong Muslim individuals can unite. It also has built a strong Muslim community through educational, social, spiritual and political programs (1,000,000 man march for Iraq). It has become a strong voice for British Muslims.