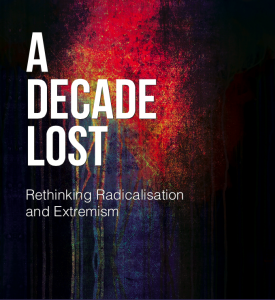 A report published by Claystone, a Muslim think tank, has challenged the official narrative about the causes of terrorism and has called for the UK Government’s Prevent strategy to be scrapped.

Speaking at a gathering in the Houses of Parliament, counter-terrorism expert Professor Arun Kundnani said that new policies to fight terrorism are doomed to failure because they are based on flawed notions of the causes of terrorism.

Kundnani pointed out to an invited audience of over a hundred that the idea which identifies radicalization based on religious ideology as the root cause of “violent” extremism does not stand up to scrutiny. He quoted a number of publications that contained flawed analysis but had nevertheless become accepted in government circles and has let to the implementation of policies that are based on those ideas but have proved ineffective in challenging terrorism.

The Author of the Claystone publication ‘A Decade Lost’ – Rethinking Radicalisation and Extremism also challenged the commonly held views of the British Prime Minister, David Cameron and former Prime Minsters: Blair and Brown that extremism is a vocal or active opposition to fundamental British values, including democracy. Kundnani says the implication of such an assumption was that terrorism could be countered by promoting values described as British. However, Prof. Kundnani went on the say that it is unclear whether rejecting liberal values was a prerequisite to becoming a violent extremist.

Nevertheless, the new Anti-Terror laws and other domestic policies include public pressure on Muslims to declare their allegiance to British values. However, according to the Claystone scholar the evidence seems to suggest that policies that create a ‘them and us’ scenario and undermine civil liberties can contribute to making terrorism more likely.

The report was also critical of two British based think tanks which were identified as contributing to the false narrative upon which UK government policies have been based. Kundnani said, the Quilliam Foundation’s front men Majid Nawaz and Ed Hussain were crucial in legitimizing the official narrative on the causes of terrorism. He also identified the Policy Exchange think tank founded by former Education Secretary, Michael Gove who argued that multi-culturalism had prevented the emergence of British values, which would have countered the rise of extremism. The Policy Exchange encouraged the government to keep a list of Muslim organisations that did not actually incite violence but held what was termed as ‘anti-social’ attitudes and therefore should not receive public money.

Kundnani believed that in the past decade the official narrative has been discredited. The report quotes John Horgan of the Study of Terrorism at Pennsylvania State University who describes, ‘The idea that radicalization causes terrorism is perhaps the greatest myth alive today in terrorism research…the overwhelming majority of people who hold radical beliefs do not engage in violence. And secondly there is increasing evidence that people in terrorism don’t necessary hold radical beliefs.”

Further research quoted in the report suggests that violence is the result of interaction of two entities and the way in which one perceives the other’s actions. It confirms that extremism is not just the product of one side’s ideology. In fact, the political context and organisation decision-making appears to be as important as individual motivation ideology.

In conclusion, the Claystone report calls for the scrapping of the Prevent policy in the light of the more authoritative understanding of radicalization and calls for a public defense of freedom of religion, an acknowledgement that British identity is continually being reshaped and amongst other things the funding of independent research to present an object picture of foreign fighters who leave to go aboard.

The report is available on line: http://www.claystone.org.uk/wp-content/uploads/2015/01/Claystone-rethinking-radicalisation.pdf