One Man and His Dog

In September, although around 50 dogs were confirmed dead in a fire at Manchester Dog home, thanks to the efforts of more than 20 firefighters who battled the flames, a number of dogs were rescued and survived. Almost immediately, the fire services were inundated with calls from devastated animal-lovers offering homes to the surviving dogs.

One such animal lover caught the eye of MAB’s Dr. Abdul Aziz in Manchester who relates his true encounter with Dog Owner and Buster the dog on a Manchester bus…

Today, I was travelling in a bus towards Manchester and I decided to go upstairs on the double decker bus. I sat near an English man and near him, a dog was sitting by the window. I noticed the dog looking at me. Then, I started a discussion with the dog owner. He told that I do not have to worry about he dog as he is afraid of strangers. He then told that his dog is called Buster and he had it for just only one month and the dog is four years old. He also said that he got it from the doghouse, which has caught fire with the death of 50 dogs a few weeks ago. When I asked him if he traveled in the bus before, he told me that Buster has traveled before on the bus and the dog behaviour who witnessed the fire before shows that he is always afraid of it. He added that he is going to meet the twin sister of Buster, which is looked after by his girlfriend.

I was amazed by the dog owner care and how he was looking after the welfare of his dog Buster. When I asked him how Buster the dog feels when he meets his twin sister dog, he replied that they look very happy to meet each other and last visit he stayed for one week with her. All along the journey, the dog owner was cuddling Buster and talking to him like a human being by passing his hand over his head and body and assured him that everything would be fine. The amazing thing is this relationship between the man and his dog. He told me that Buster is cautious when he sees strangers. I asked him that did he get any money to look after him as the appeal for the burned dog care house collected a lot of money?.. He replied that he did not get anything. This man told me that he had looked after dogs before and consequently I assumed that he was a very experienced dog handler. Then, he and Buster came to the end of the journey and the dog was very happy to come off the bus and I presume looking forward to see his twin sister dog.

I was thinking as I continued my journey towards Manchester that Allah (SWT) has put his mercy in the heart of this man and his care was appreciated and reciprocated by his dog Buster. Finally, I wish that humanity can show this kind of mercy and care between each other in both UK in this cold winter and many regions of the world. 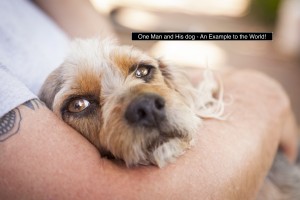